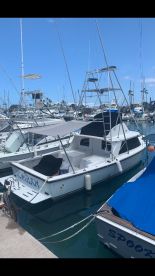 Team up with Captain Scott Neel and let him take you to the fast and furious fishing action that could easily land you your next trophy catch. Black, Blue, and Striped Marlin come in gigantic sizes here, and the Tuna, Mahi Mahi, and Wahoo (Ono) bite is just as productive.

Oahu Pelagic Sportfishing welcomes you to Hawaii, a natural paradise and a first-class fishing destination. Meet its gorgeous sea world as you explore the offshore waters and search for many interesting and prized species that call this area home. Come to Honolulu and have an unforgettable angling experience. 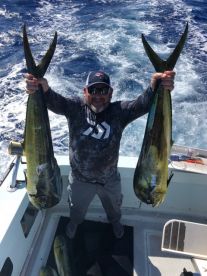 Honolulu is often described as the “racing pulse” of Hawaii, and an adventure aboard Five Star Sportfishing Hawaii more than helps the city live up to this reputation. Jump aboard – it’s time to get those pulses racing! 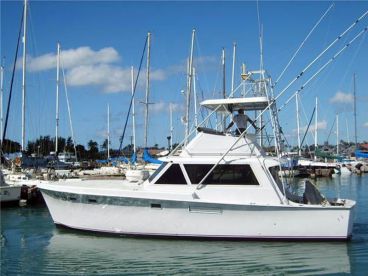 You will fish aboard his 41-foot Hatteras named Play n Hooky that is powered by two 380 HP Cummins engines. The boat is safe and powerful on the water and contains all the electronics needed for a successful trip. There is a very comfortable salon area for when you tire of fighting big game fish, a kitchen, and a toilet. 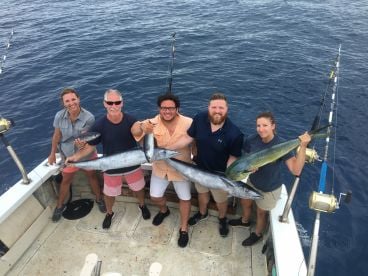 To The Max Charters 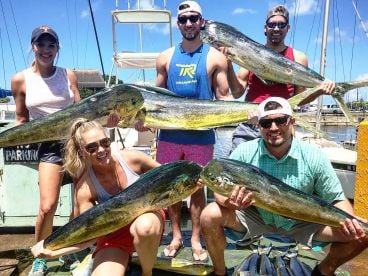 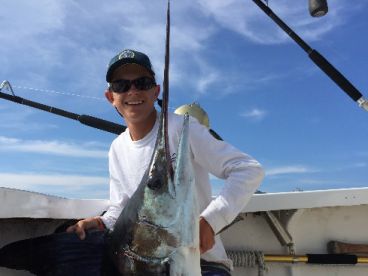 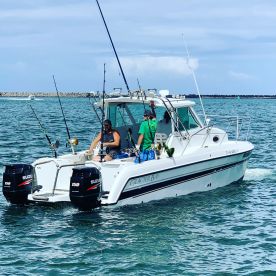 If you’ve never tried the deep sea fishing Hawaii is so famous for, let us to explain why you should get on a plane right now. Hawaii is the battleground for many of the ocean’s apex predators. Blue, Black, and Striped Marlin all show up here, as do Shortbill Spearfish, Swordfish, Mahi Mahi, Wahoo, and both Yellowfin and Bigeye Tuna. You’re never going to be short of big game battles here!
The fish are only half the picture, though. Hawaiian charter boats are large, well-equipped, and helmed by experienced captains. They have to be, with so much competition and such a high bar of what to target. Then there are the islands themselves – stunning, green mountains rising from 10,000 feet of water in just a few miles. You really couldn’t find a more dramatic place to go fishing.

Hawaii is not just one place. Every island is a little different, and your trip will also be different depending on where you go. Big Island is the most famous when it comes to sportfishing. Kailua-Kona (often known simply as “Kona”) is one of the greatest deep sea playgrounds on the planet. The current world record Blue Marlin was caught out of Kona, and the Hawaii Marlin Tournament Series is held here each year.
Oahu also has an incredible big game bite. It’s easier to get to and has a lot more going on off the water in the bustling streets of Honolulu. Kauai is the least-visited of Hawaii’s major islands, but that just means more fish for you! Buoys surround the “Garden Isle”, acting as FADs and making for incredible topwater action, even by local standards. Then you have Maui, which people sometimes write off for “needing to travel too far.” Their loss is your gain, because being the only boat out is well worth a half-hour cruise, especially with the stunning setting you’ll find here (think mountains, whales, and tropical sunshine).

Trolling is the most common tactic for targeting Marlin. This is no “throw out a few lines and see what happens” fishery, though. You can expect complex spreads of dredges, spreaders, teasers, lures, and live or skirted baits. Many charter captains also throw kites into the mix, especially when going after Mahi Mahi or Tuna (known locally as Ahi).
If you’re looking for something a little more specialized (by which we mean difficult) you can also try deep sea fly fishing. Striped Marlin are incredible fun on the fly, and landing a Blue Marlin on fly gear is the ultimate ambition of many seasoned anglers. The main way to do this is to troll unhooked teasers behind the boat to “bait” the fish, then “switch” your teasers out for a well-placed fly at the last second. Sounds easy, right? It’s not.

You can catch all of Hawaii’s top pelagic predators year-round. They do have high seasons, so timing your trip is the key to success if you’re after a particular species. Black and Striped Marlin are best in spring, while Blue Marlin and Yellowfin Tuna are best in the heat of summer. Spearfish peak throughout the first half of the year, while Mahi Mahi and Wahoo (AKA Ono) tie the spring and summer seasons together. They show up in force mid-spring and stay until the middle of summer. Even in the depths of winter, there are a ton of tasty Bigeye Tuna (also known as Ahi) to target.
Tournament season kicks off in June, so visiting towards the end of May can be a great way to enjoy epic battles without fighting the crowds at the dock. Otherwise, the weather is actually better over the winter, so you can enjoy your time off the water even more.
No matter when you go, you can always find huge fish, great boats, seasoned crews, and a stunning backdrop for your day on the water. And what more do any of us really want in life? So next time you’ve got a few spare days or a family vacation coming up, why not take a trip to the Paradise of the Pacific? It’s more than earned its name.
Гавайи
4.13
На основе 23,457 отзывов клиентов FishingBooker