Reel Release offers sport fishing out of Virginia Beach, VA. Their number one goal is customer service, and they promise to provide the best fishing experience possible. Cruising out of Lynnhaven Inlet, Captain Robbie will take you fishing the Chesapeake

Your trip will start on a 25’ Parker center console powered by a 300 HP Yamaha engine. The boat can sit up to 6 guests, uses modern navigation electronics, and features a livewell and ice-box. For a tip of 20%, you’ll have a first mate at your disposal to give you help with anything you’ll need. 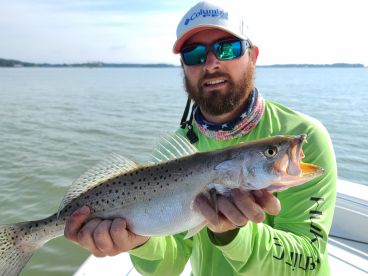 Your trip will start on a 24’ Everglades bay boat. Powered by a 300 HP Yamaha engine and equipped with modern navigation electronics, it will take you to the fish in no time. Its maximum capacity is 3 anglers. The boat’s got a toilet, wireless trolling motor, and a livewell. 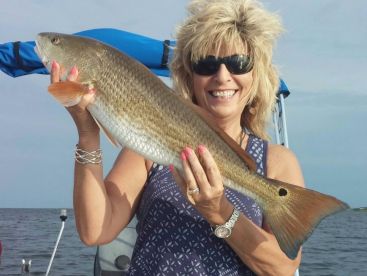 Hop aboard his 19’ Carolina Skiff, powered by a 50 HP Yamaha engine, and ideal for up 3 anglers. She’s equipped with GPS to help you find the fish and life jackets for safety. What’s more, she has an anchoring system to make sure you stay put once you spot your targets. 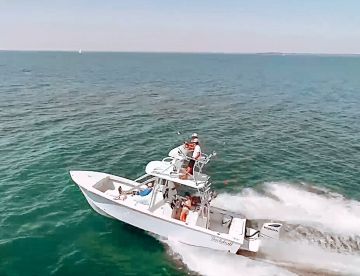 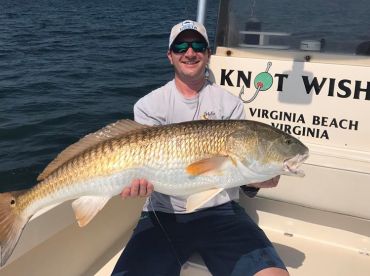 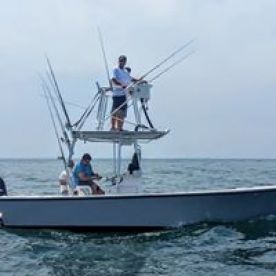 Adventures On The Water

The Chesapeake Bay is a fishing goldmine for saltwater and freshwater anglers alike. With more than 150 rivers and creeks that flow into the bay, its aquatic habitat gives life to hundreds of amazing species. Its diversity allows for many different types of fishing techniques, but when it comes to fly fishing in the Chesapeake Bay, there’s really nothing else quite like it.

Fishermen from all over the country visit the Chesapeake Bay to get a cut of the action. Whether you’re going after Spanish Mackerel, Bluefish, Cobia, Redfish, Trout, or Stripers, this area holds some of the hottest fishing grounds for fly fishermen.

Striped Bass, also locally known as Rockfish, is hands down the most popular species to target on fly. If you’re fly fishing for Stripers in the Chesapeake Bay, you’re working with a pretty good time frame. Striped Bass show up in April and stick around until Thanksgiving. However, when fly fishing for Stripers, you’ll need to switch up your technique, depending on the season and location.

Historically, Stripers have dominated the bay, but their numbers have been dwindling over recent years due to overfishing. Today, the largest schools of Rockfish are over towards the mouth of the Eastern Bay, so your best bet is to visit the Maryland side.

Speckled Trout is a relatively new species to target by fly, but if you’re fishing in shallower parts of the bay, it’s an excellent choice. Weakfish, or Gray Trout, is also a top target.

The bay’s tidal creeks and marshes produce excellent fly fishing conditions for Trout. The best time to target Gray and Speckled Trout is between May and October, especially on the eastern side of the bay, between the Choptank River and Tangier Sound.

Chesapeake Bay Redfish are on the rise. Due to conservation efforts from southern states, as well as warming water temperatures, Red Drum’s range has expanded north. Targeting a “Chessie Red” on a fly is extremely challenging and they’re known for being hard fighters. Redfishing in the Chesapeake Bay really starts to heat up around June and begins to taper off in October. July and August will give you the highest likelihood of catching a Bull Red.

Maryland and Virginia saltwater charters are licensed to cover everyone aboard, so you won’t need to purchase one separately. However, anglers 16 and older who plan on fishing alone need to buy a license before fishing.

Many charters provide fly gear, but some require you to bring your own, so check with your captain before heading out. Additionally, you might want to pack extra layers, as well as rain gear and sun protection, depending on the weather.

You’re now one step closer to planning your fly fishing adventure in the Chesapeake Bay. Pick your spot, choose a captain, and get ready to fish one of the most productive estuaries of North America!

What do you do when wives have a conference? Go fishing!
Michael L. рыбачил с Outta Line Charters Октябрь 13, 2021
Outta Line Charters with Captain Andy! 410 991-1781
3 Hour Trip with Captain Wally
Patricia(Lynne) M. рыбачил с Strike Zone Charter Fishing Октябрь 3, 2021
Go out with Captain Wally - he's very knowledgeable. You'll have a great time and you'll catch lots of fish!
Full day with Capitan Mike
Russell O. рыбачил с Maritime Mayhem Charter Service Октябрь 1, 2021
Find bloodworms and lug worms before your trip. I don't recommend staying at the Quantity Inn in Gloucester. Under major construction and the front desk help is not professional or nice.
September fishing trip
Billie R. рыбачил с E-Fishinsea Sport Fishing Charters Сентябрь 27, 2021
To remember it's up to the fish whether they're going to bite or not they're not it's not the captain or the 1st mate are captain and 1st mate were great. Our captain tried very hard to put us on fish. The captain and 1st mate were a pleasure to be around and work with.
Amazing!
Will P. рыбачил с Biff Fishing Charters Сентябрь 19, 2021
Ask for the boat “BIFF!!” You will not be disappointed!! I truly found a Captain that cares the fishing and catch and release!
Fishing with Mike
Christopher V. рыбачил с Tango Charters Сентябрь 8, 2021
Super friendly guys, made it very enjoyable.
1pm trip with Vickie Ann charters
William L. рыбачил с Vickie Ann Charters Сентябрь 4, 2021
I would highly recommend contacting Vickie Ann charters. PERIOD!!!!
Fishing trip
Larry H. рыбачил с Prowler Fishing Charter Август 28, 2021
Yes would recommend fishing there lift lots of Weights before going your arms will be sore from Catching so much fish